"Was it something I ate?" is a perfectly natural query in response to a change in bowel habits, but may not necessarily be the case.

The best way to protect yourself against bowel cancer is to know the symptoms, and chat to your doctor if you have any concerns. Most people with these symptoms don’t have bowel cancer so there’s little cause for concern, but here’s what to be aware of: 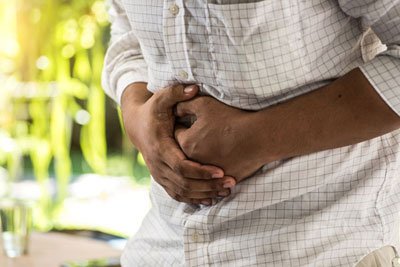 Let’s face it, many people feel embarrassed to speak to anyone, let alone thier doctor, about their toilet habits. Yet if you found a suspicious looking mole or lump, you’d almost certainly book an appointment.

Doctors are used to speaking to people with bowel problems and would much rather you raised your concerns. When caught early, bowel cancer has one of the highest survival rates.

The uncomfortable truth is that embarrassment and lack of knowedge of the symptoms costs lives.

I put off going to see a doctor for too long thinking that my symptoms were the result of other things. If my partner hadn’t started nagging me and I’d left it another few months longer, I wouldn’t be here today.

The early stages of bowel cancer can have no obvious symptoms and, therefore, go undetected.  If you are over the age of 60, you will be sent a screening kit in the post – use it to be on the safe side. If you don't manage to maintain a healthy lifestyle, or have a history or bowel cancer in your family, then you must be aware that you have an increased risk.

If offered a screening, take the opportunity. And if you have concerns, don't wait for the symptoms to appear before taking action.