SOUTHWEST TURNS THE OTHER CHEEK TO BOWEL CANCER 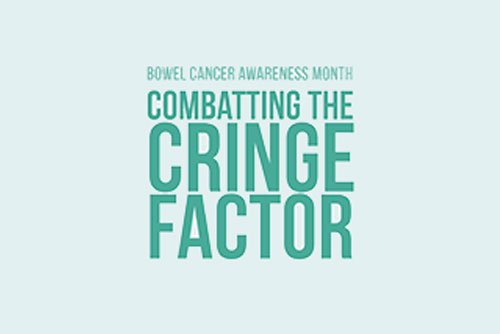 SOUTH WEST TURNS THE OTHER CHEEK TO BOWEL CANCER • 1 in 3 people in the Westcountry affected in some way by bowel cancer • 9 in 10 admit that knowledge of bowel cancer ranges from poor to average • 1 in 4 say ‘embarrassing symptoms’ deter them from seeking medical help • More than half of people in the region have never had a public health screening A significant number of adults in the South West would let the ‘cringe factor’ influence their decision to seek help for the symptoms of bowel cancer, according to research from charity Bowel Cancer West. It revealed that four in 10 people are embarrassed about discussing their bowels or bowel habits with a GP. And a quarter say so-called ‘embarrassing symptoms’ would deter them from seeing a doctor. Marking April’s Bowel Cancer Awareness Month, 1,000 adults in the South West were surveyed about their attitude to bowel cancer, also known as colorectal cancer, its symptoms and attitudes to bowel health. It found that despite a third of people knowing someone who has had or is currently suffering from bowel cancer; awareness of the second biggest cancer killer is still very low. A shocking nine out of 10 people admit their knowledge of the symptoms is poor to average. In fact, 65% of over 55s – the age group most at risk of this illness – describe their awareness of the symptoms as average and 19% say their knowledge is poor. The cringe factor also tends to drive people online to search for solutions to ‘embarrassing’ health issues, with two thirds turning to internet research to research symptoms.

Upon seeing a GP, more than two thirds of people prefer to talk in euphemisms when discussing their bowels. This reticence also sees a greater amount of people relying on their doctor to ask the right questions during a consultation, rather than leading the conversation themselves. Embarrassment potentially plays a role in take-up of national screening programmes. The research reveals a general lack of testing (58% of all respondents have never had a health screening covering bowel, breast and cervical). One in 10 admits they did not attend despite being contacted by their health care provider, and a further 11% confess that where test results have been unclear, they have either delayed or declined a retest. Mark Coleman, Director of Bowel Cancer West, says: “Our research highlights that there is still a very unnecessary stigma when it comes to discussing our bowel habits as well as a lack of awareness about bowel cancer. Even with screening programmes in place, we’re seeing a significant number of those invited to attend missing appointments.” “This April, we’re calling on people in the South West to combat the cringe factor: familiarise yourself with the symptoms and don’t delay in seeking help if you experience any symptoms. Ultimately, if feeling embarrassed for a few minutes could lengthen or save your life then it’s absolutely worth it. “Let me be clear on Bowel cancer: it is curable if it is caught early so awareness of symptoms is the key. At Bowel Cancer West our ambition is to increase the number of people surviving bowel cancer and this is only possible with greater awareness and earlier detection of the illness.” Other research findings include: Myth busting gender differences: • The myth that men are less likely to visit a GP is dispelled by Bowel Cancer West’s research. Faced with concerning symptoms, men are more keen to see a doctor straight away (43% compared to 41%) while women are the most likely to delay (44% compared to 40%). Men will also go willingly while women will go but feel more uncomfortable. • 45% of women feel embarrassed about talking about bowel habits and poo (compared to just over a third of men). In addition, 13% admitting of women would only visit a doctor when it became urgent (compared to 11% of men). Women are also much more likely to talk in euphemisms than men (42% compared to 28%). Regional differences: • People from Bristol are the most reticent to discuss their bowels, followed by Somerset (39%), Dorset (40%), Gloucestershire (43%) and Cornwall & Isles of Scilly (45%). On the other hand, 68% of people from Wiltshire said that speaking to a professional would not worry them. Behind straight-talking Wiltshire, 60% of Devonians would not have a problem visiting or talking to their GP. • Lack of awareness is most concerning in Bristol and Devon, where a third of residents describe their awareness as poor. On the flipside, 15% of Bristol residents also claim to have excellent knowledge (the highest figure in the region). Mature in many ways: • While the younger generation are thought to be the most frank, when it comes to our bowel habits, 18 to 24 year olds are the most self-conscious. The good news is that just as the risk of bowel cancer increases, our reservation reduces with age, with almost 71% of over 55s able to banish their blushes when it comes to discussing bowel habits with a professional. • Age also determines the type of language we use when talking to our doctor, with 59% of 18 to 24 year olds admitting to using euphemisms such as “down there” or “when I go to the toilet”, compared to only 1 in 5 (21%) of over 55s. For more information on bowel cancer, how it is being dealt with in the South West and to get involved in fundraising efforts to help tackle this disease, visit www.bowelcancerwest.org.uk