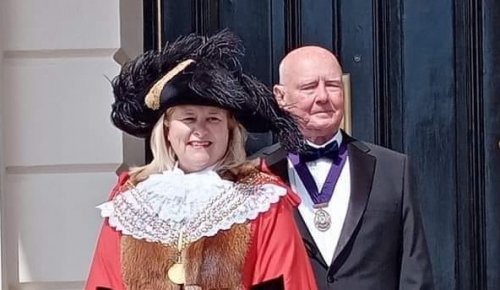 The new Lord Mayor of Plymouth, Councillor Terri Beer, has chosen to support Bowel Cancer West during her term in office.

She will donate proceeds from various events in the next 12 months to the Devon-based charity.

Councillor Beer will also give support to the NSPCC.

Her year in office began on Friday May 21 when she was sworn in during a ceremony at Plymouth Guildhall.

She said: “You may have heard a lot about me from colleagues and know that I have been a bit of a rebel in my time. Always at the centre of attention, but always there for the people when they needed me the most.”

Councillor Beer’s husband, Colin, was diagnosed with bowel cancer in 2017.

He underwent treatment, including time in intensive care and rehabilitation, and recovered - only to be told in 2020 that he had developed lung cancer.

“As you can see it has been a rollercoaster, but Colin is here today and I am proud that he will join me on my many duties and engagements,” said the Lord Mayor.

She added: “Bowel cancer as a disease has a dangerously low profile. But Bowel Cancer West is looking to change that through their dedicated team of volunteers and trustees
who ensure that every pound they spend is invested in the south west.”

Charity chairman Mark Coleman said: “Thank you to the new Lord Mayor, Councillor Beer, for recognising the work that we do at Bowel Cancer West. We fund research, training and awareness to help beat bowel cancer, which is the UK’s second biggest cancer killer.

“I know she has some terrific events planned for her year in office, and her support will help us reach more people. We aim to launch a new care package for patients and families affected by bowel cancer - so her backing is timely and crucial.”