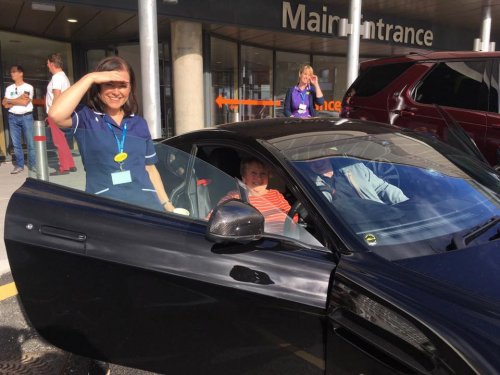 If you were enjoying the glorious sunshine over the first weekend in April (bowel cancer awareness month) there is a good chance you’ll have seen a flash of red, an electric-blue, or shimmering grey in the form of a super car whizzing around the south west. If that didn’t catch your attention, the noise the BCW team made raising awareness of bowel cancer would have!

The BCW grand tour was the talk of the west country. A group of cars (including a McLaren, a La Ferrari, Porches, Aston Martins, and a Range Rover) were on a mission to visit seven hospitals across the south west. They met with many members of the public on route informing people about the symptoms of bowel cancer and early detection through screening.  They were greeted at the hospitals by wonderful NHS staff and patients who were thrilled to meet their local charity and, of course, be given a chance to sit in the super cars.They were also joined by Truro based surgeon Paul Lidder in his ‘Fabrari’ (an old Skoda Fabia made to look like a Ferrari!) and that certainly made heads turn.
Executive Director Ed Sinclair said:
“The tour was exceptional and went beyond our expectations as to how we would be recieved. The attention we have generated already for bowel cancer awareness month is incredible and it’s only just the beginning. It was fantastic meeting so many wonderful hospital staff and the patients they have operated on to get some headline attention for this disease in the south west. Now is our time to step up and make a real difference to early diagnosis across the region and not let this disease get the best of us.”
Many members of the local media also attended and stories have featured right across south west news papers, as well as on radio stations and through videos in the media:

If you would like to play your part in bowel cancer awareness month, please get in touch to see how you can support: info@bowelcancerwest.com