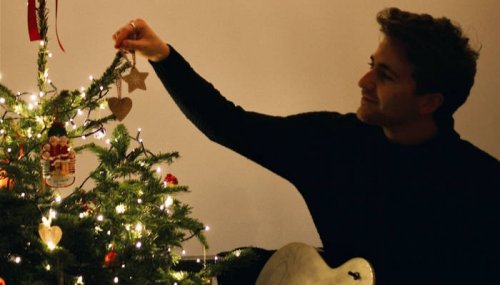 Cornwall musician Charlie Scoble has released a new Christmas single - and is giving the proceeds from its sales to Bowel Cancer West.

And what's more - he is performing a festive fireside live concert especially for our charity this Friday night, December 18, at 7.30pm. It will be streamed on the Bowel Cancer West Facebook page - click here to go to the page

Charlie is 23 and lives in Calstock. He started playing at the age of 10 and went to university at the British & Irish Institute Of Modern Music, studying songwriting.

At the start of 2020 he was supporting Andreya Triana on her UK tour. Unfortunately during the release of his debut single Lockdown happened and so the release tour was cancelled.

From a young age he always had a love for Soul & R&B. His father's Wurlitzer jukebox player was a massive part of his childhood and musical Influence as it contained singles of the likes of Al Green, Marvin Gaye, Diana Ross & The Supremes, Stevie Wonder & The Detroit Spinners.

And if you'd like to donate to Bowel Cancer West this Christmas, and help support our research, awareness and training to beat bowel cancer, go to our Christmas Appeal page by clicking here